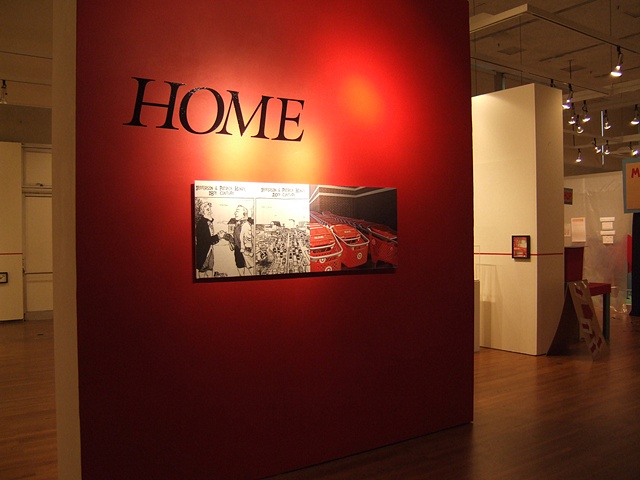 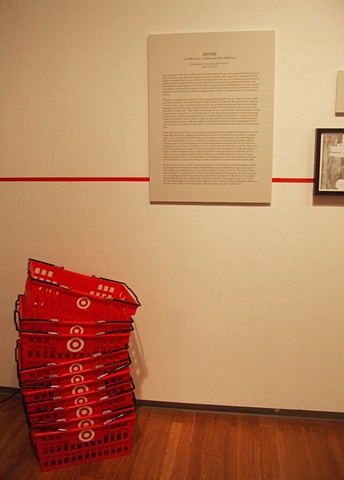 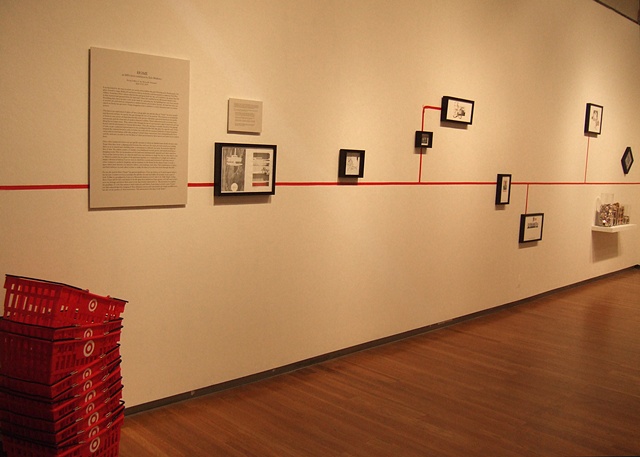 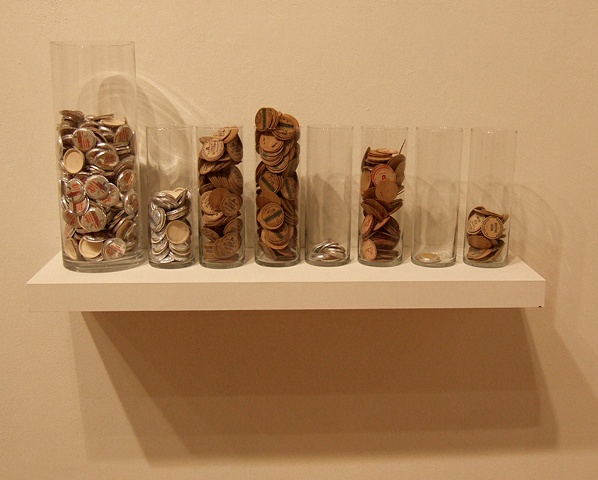 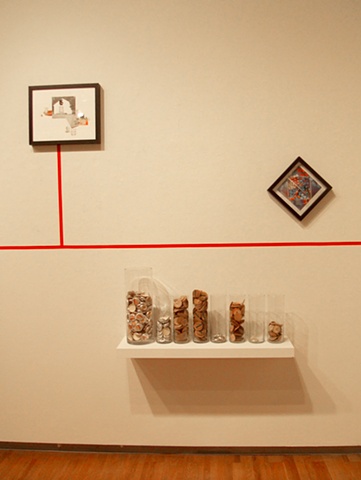 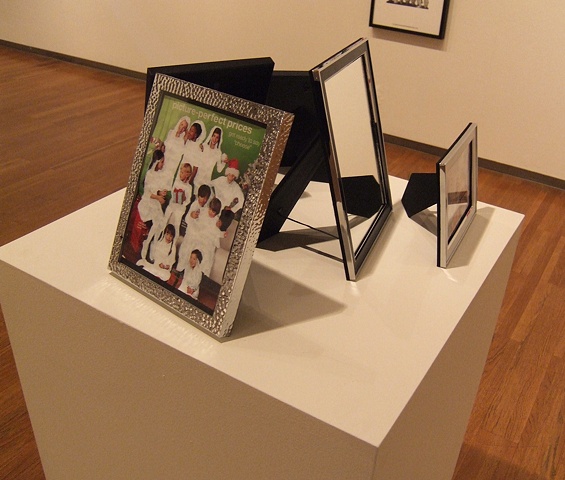 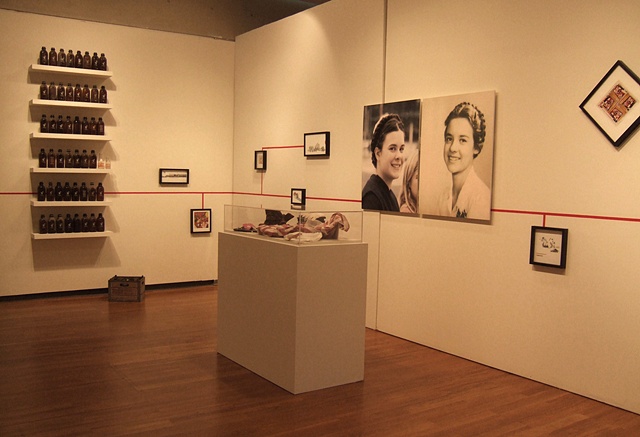 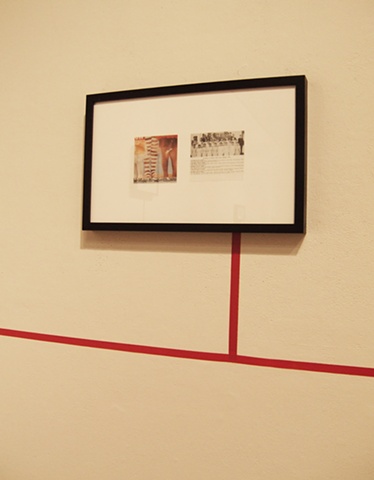 Socks are a Form of Rebellion,
installation shot
collage
12"x 19" 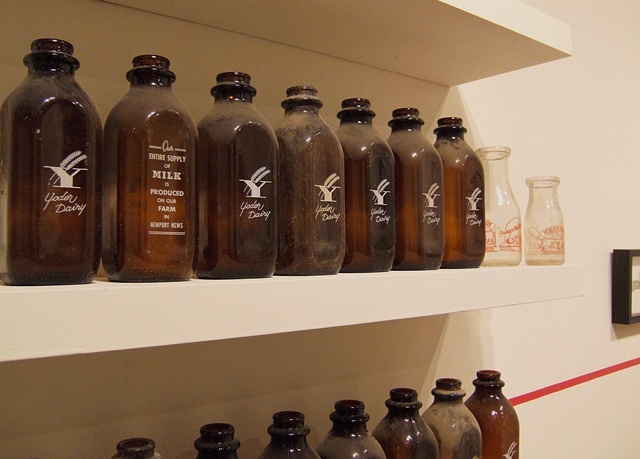 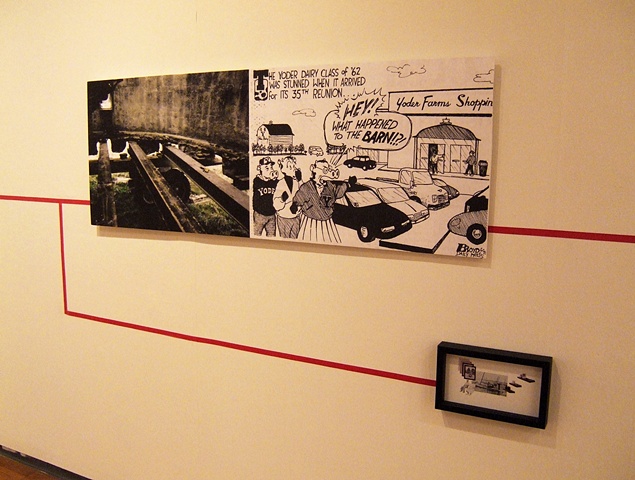 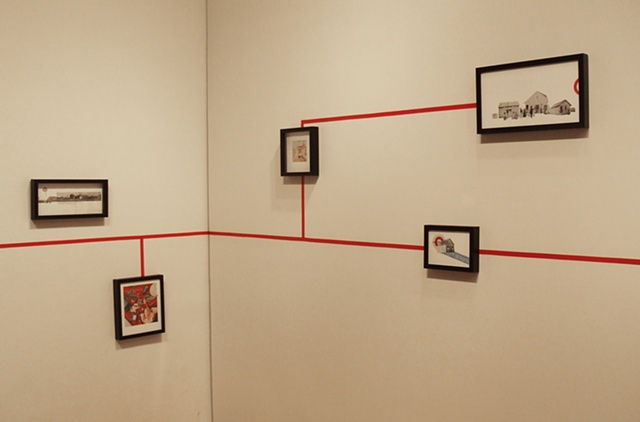 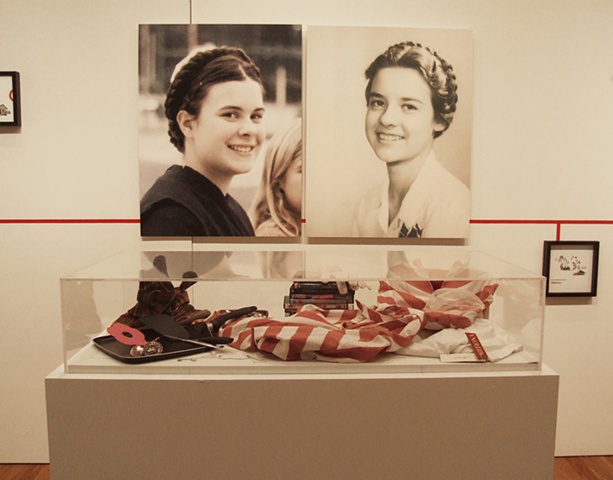 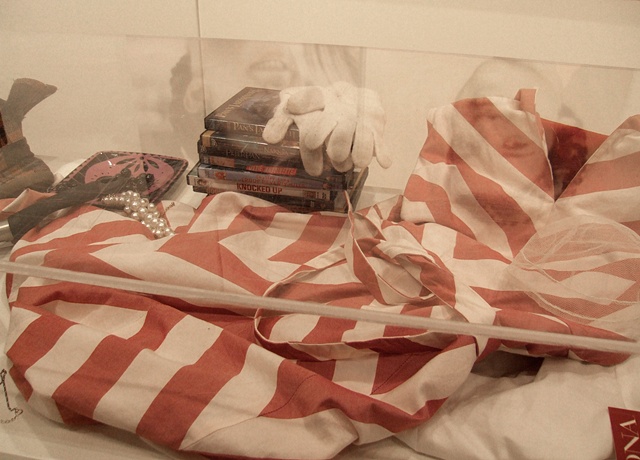 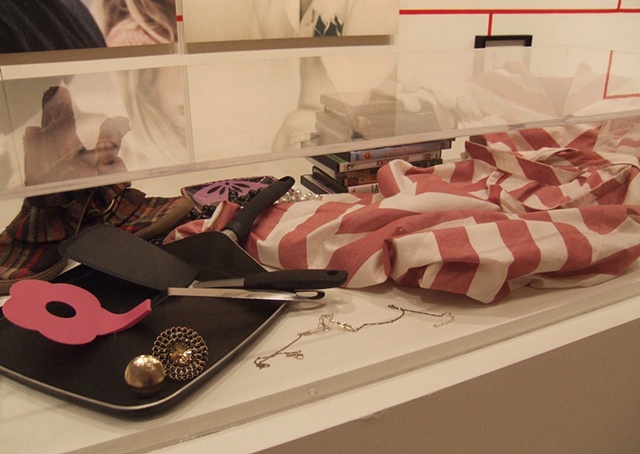 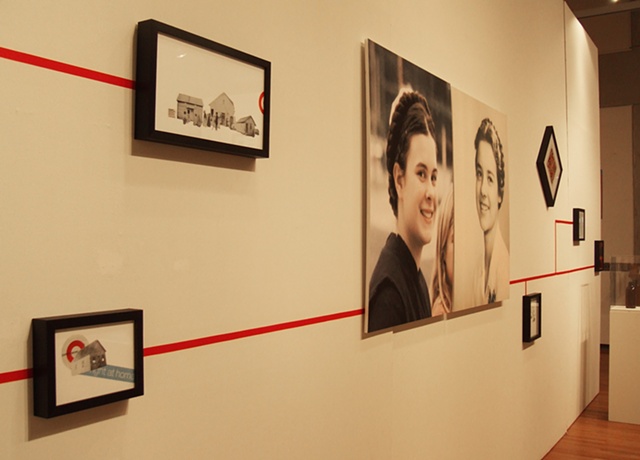 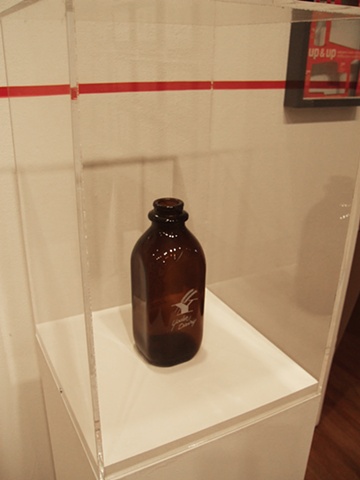 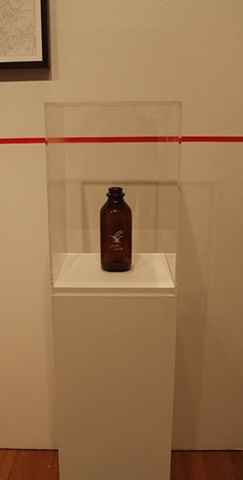 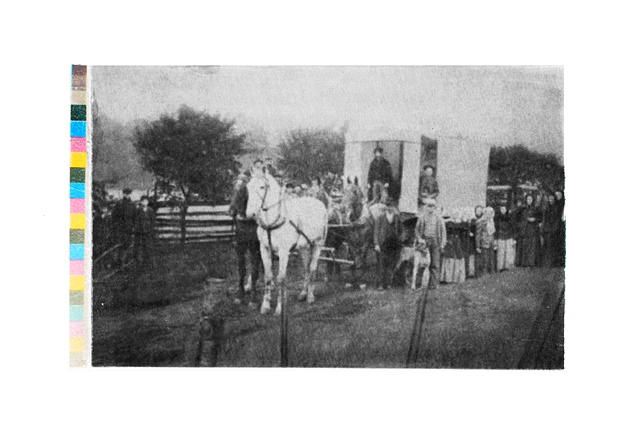 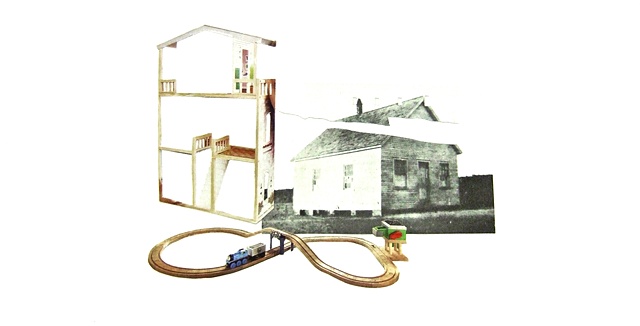 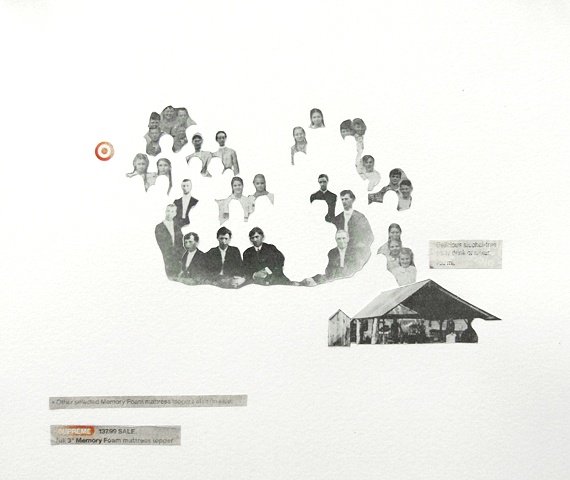 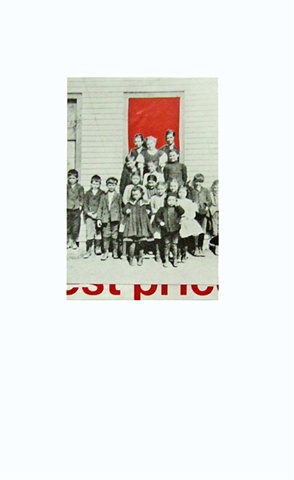 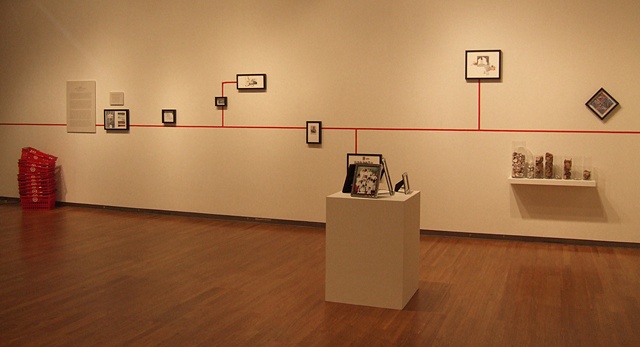 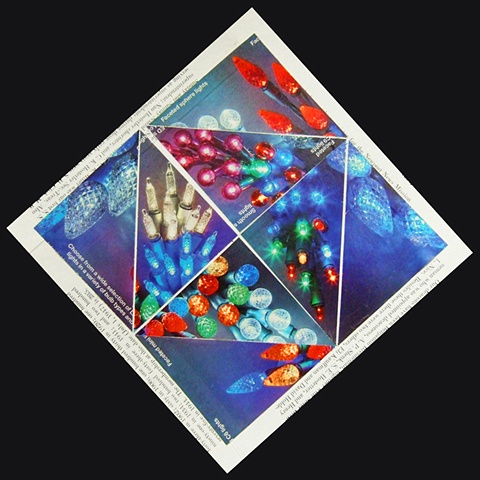 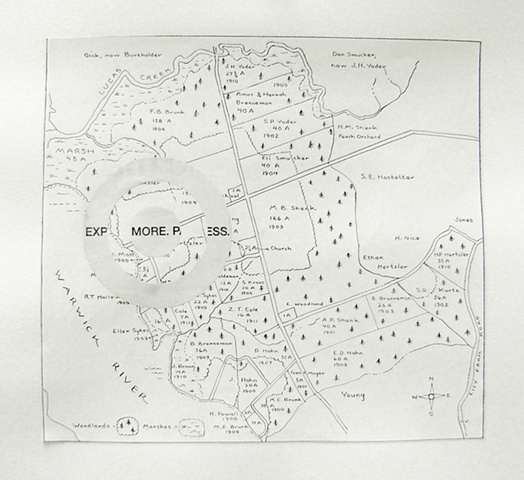 Would you rather be a history lesson or a tourist attraction?
collage
6.5"x 14.25" 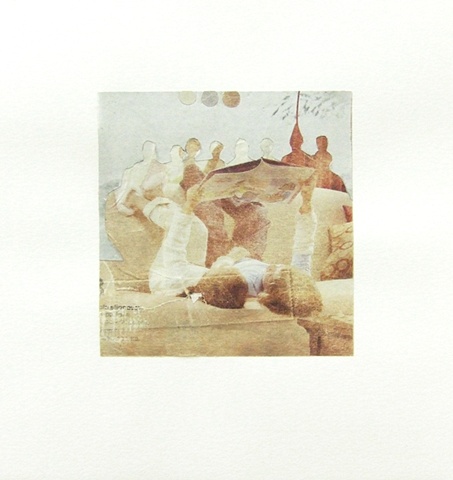 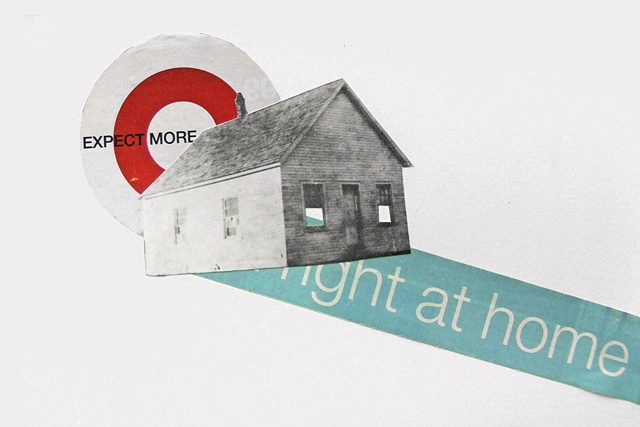 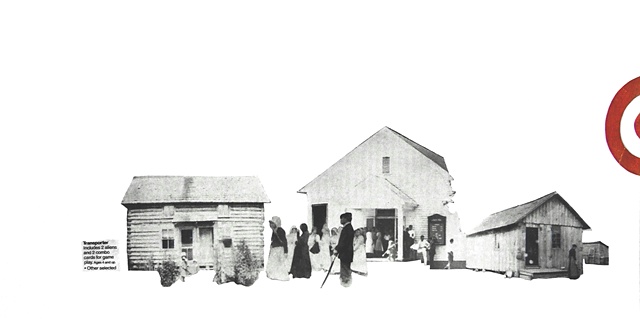 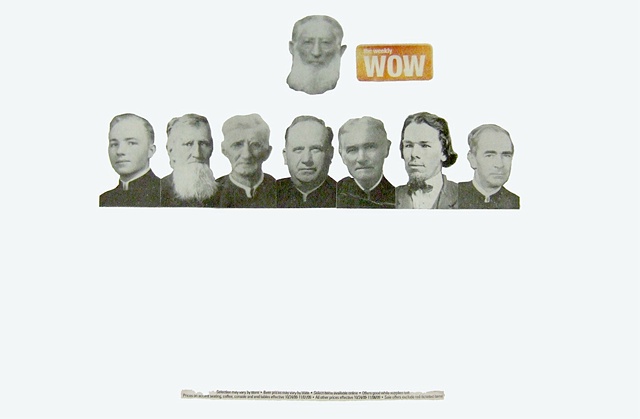 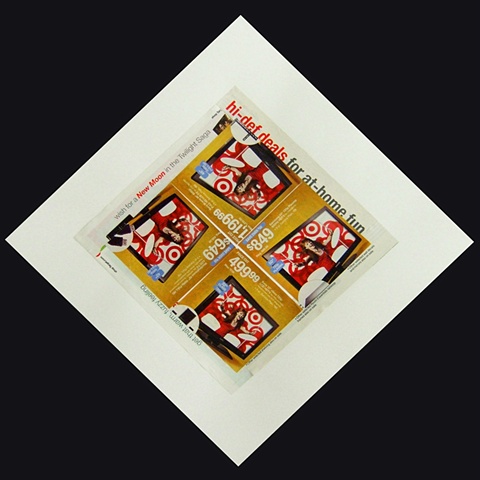 I am fascinated by the ways in which our society memorializes the past. Growing up in Southeastern Virginia, I stood in empty fields and watched as visitors reverently read monuments to unknown Civil War soldiers. Sometimes these visitors collected dirt and grass from the site, as if, somehow, the power they felt in that moment had sprouted from the land itself. I have also watched as my Mennonite family’s once flourishing dairy farm became a relic in the midst of a growing city: the buildings have now been moved to another site and stand as a testament to modern historic preservation. In turn, the land that once sustained my family has sprouted a Target shopping center, a symbol of a more fast-paced and convenient present.

This show is an exploration of place: of how a geographic site and the idea of “home” become merged and divorced and how we narrate the past through the lens of the present. The museum, in its multitude of forms, is a key source of inspiration for this work: private collections, preserved historical sites, public monuments, and the clean lines of modern historical exhibits. These institutions seek to recreate something that does not actually exist. They achieve this through the use of representative objects (both real and replicated) and the presentation of textual information. They also attempt to visually document the passage of time, to give a physical representation to the sociological shifts that take place in a specific area. I have adopted the museum format in order to imbue my work with the assumed authority of historical preservation and documentation, while also seeking to stretch these conventions. I am manipulating the form (and the authority) in order to test the limits of what can be found in these spaces and what can be read in them.

I have often wondered if there was one specific moment at which my familial home finally became more Target than dairy farm: a tipping point between then and now. For years, the farm stood as a working dairy or, in its unused and crumbling state, a monument to a lifestyle now gone. It seemed to fight the flow of time. Yet, within a matter of months, it was bulldozed, moved, paved, and transformed into a shopping center. The two incarnations of this land seem fundamentally opposed, as if there must be a clear-cut line between them, yet what the land once was continues to shape the way we view what it now is. When I consider the two parts of the spectrum together, as a continuation of a single story and not simply a division of history, I can see ways in which they co-exist and elements of each that seem to relate: commerce, aesthetic simplicity, and an emphasis on the family. In this show, I want to create a space where these histories can intersect, inform, and challenge each other. This combination of forces, and their influence on each other, is closer to reality for those of us who have lived through this shift.

For me, the need to find a “home” has special significance. I love my history, yet I cannot ignore what it has become. I cannot revel in a nostalgia that glorifies the past and vilifies the present. I am a part of both. Unlike my grandparents, I am not a Mennonite farmer, nor do I wish to be. I like Target. I shop there. I have left the farm and much of the life spent there behind as I have grown, yet I still want to preserve my heritage and honor those parts of me that remain connected to it. My intention is to explore the possibility of a site that embraces both modernity and history. I am trying to create a new “home,” one that acknowledges the merging of these disparate sources and concentrates not simply on differences, but also on the product of their intersection. This intersection is the place I call “home.”